The first California Surgeon General, Dr. Nadine Burke Harris, set a bold goal to reduce ACEs and toxic stress by half in one generation. Under the leadership of Gov. Newsom, and in partnership with California Health and Human Services Secretary Dr. Mark Ghaly and statewide health and community leaders, the Office of the California Surgeon General is advancing systemic reforms that recognize, and respond to, the effects of ACEs on lifelong health.

About ACEs and Toxic Stress

An overwhelming scientific consensus demonstrates that cumulative adversity, particularly during critical and sensitive developmental periods, is a root cause to some of the most harmful, persistent and expensive health challenges facing our nation.

The term Adverse Childhood Experiences or “ACEs” comes from the landmark study of the same name published by the CDC and Kaiser Permanente over two decades ago and specifically refers to the ten categories of stressful or traumatic events assessed in the study. These include physical, emotional or sexual abuse, physical or emotional neglect or “household dysfunction” including parental incarceration, mental illness, substance dependence, parental separation or divorce, or intimate partner violence.

Childhood trauma isn’t something you just get over as you grow up. Pediatrician Nadine Burke Harris explains that the repeated stress of abuse, neglect and parents struggling with mental health or substance abuse issues has real, tangible effects on the development of the brain. This unfolds across a lifetime, to the point where those who’ve experienced high levels of trauma are at triple the risk for heart disease and lung cancer. An impassioned plea for pediatric medicine to confront the prevention and treatment of trauma, head-on.

A robust body of literature demonstrates that ACEs are highly prevalent, strongly associated with poor childhood and adult health, mental health, behavioral and social outcomes and demonstrate a pattern of high rates of intergenerational transmission.

When any one of us experiences something scary or threatening, our brains and bodies activate our stress response which leads to the production of high levels of stress hormones including adrenaline and cortisol and is responsible for many of the feelings we associate with being terrified. The amygdala, the brain’s fear center, is activated and the prefrontal cortex, which is responsible for executive functioning including attention, judgement and impulse control, is inhibited.  Stress hormones stimulate our hearts to beat stronger and faster, raise blood pressure and blood sugar, and activate our immune system, among many other effects.  The stress response is a normal and, in fact, essential part of our biological evolution, and allows us to respond and adapt to challenging circumstances.

However, severe, intense or prolonged adversity may lead to overactivity of a child’s stress response.  In addition, children require the nurturing care of a trusted adult and safe environments to shut off the stress response and restore normal functioning. Without these buffers, the biological stress response becomes overactive.  Children are uniquely vulnerable to the effects an overactive stress response because their brains and bodies are just developing. High levels of adversity, without the buffering protections of trusted caregivers and safe, stable environments, lead to changes in brain structure and function, how genes are read, functioning of the immune and inflammatory systems, and growth and development. These changes comprise what is now known as the toxic stress response.

ACEs and toxic stress represent an urgent public health crisis with wide-reaching health and societal impacts, from heart disease to homelessness.1-5 According to recent data, 62.3% of California adults have experienced at least one ACE, and 16.3% have experienced four or more ACEs (2011–2017 data).6

ACEs are strongly associated, in a dose–response fashion, with some of the most common and serious health and social conditions facing our society, including nine of the 10 leading causes of death in the United States, and with earlier mortality.1,7-11

In addition, ACEs are associated with our most pressing social problems, including learning, developmental, and behavior problems, high school noncompletion, unemployment, poverty, homelessness, and felony charges—1,8,9,12-18

A recent estimate based on 2013 expenditures revealed that ACEs cost California $112.5 billion overall annually ($10.5 billion in personal healthcare spending and $102 billion in years of productive life lost), and will cost over $1.2 trillion in the next 10 years. 3-5,19,20

The high prevalence of ACEs in California, along with the intergenerational accumulation of impacts for individuals, families, and communities, have resulted in a public health crisis, with the greatest impacts on already disadvantaged individuals and communities. The time to act on this crisis is now.

Association of ACEs with Leading Causes Deaths in the US

The extensive body of literature on the impacts of ACEs meets the Bradford Hill criteria for establishing likely causality (cause-and-effect) from observational data.12,13 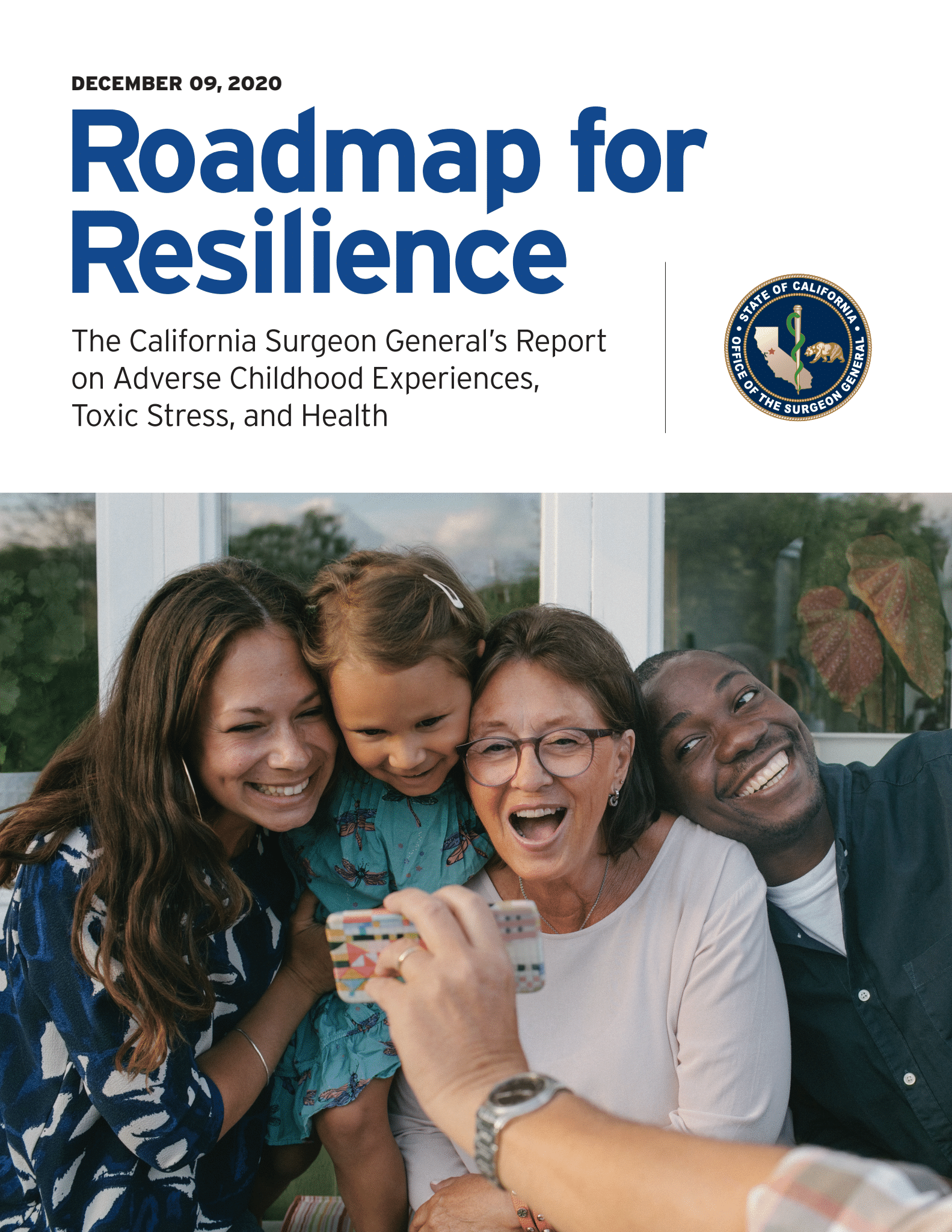 Roadmap for Resilience: The California Surgeon General’s Report on Adverse Childhood Experiences, Toxic Stress and Health serves as a blueprint for how communities, states, and nations can recognize and effectively address Adverse Childhood Experiences (ACEs) and toxic stress as a root cause to some of the most harmful, persistent, and expensive societal and health challenges facing our world today. The report provides clear cross-sector and equitable response solutions, models, and best practices to be replicated or tailored to serve community needs. This comprehensive report brings together ​insights from global experts across sectors, specialties, and disciplines to promote science-based approaches to primary, secondary, and tertiary prevention strategies for ACEs and toxic stress. The report further specifies a sector-specific and cross-sector roadmap for addressing ACEs and toxic stress at the state level, prioritizing prevention, ​early detection, evidence-based interventions and equity in outcomes, ​highlighting the need for enhanced coordination across the following sectors: Healthcare; Public health; Social services; Early childhood; Education; and Justice.

The Office of the California Surgeon General and the California Department of Health Care Services (DHCS) are leading a first-in-the-nation statewide effort to screen children and adults for Adverse Childhood Experiences (ACEs) in primary care, and to treat the impacts of toxic stress with trauma-informed care. The ACEs Aware initiative is built on the consensus of scientific evidence demonstrating that early detection and evidence-based intervention improve outcomes. The bold goal of this initiative is to reduce ACEs and toxic stress by half in one generation, and to launch a national movement to ensure everyone is ACEs Aware.

All providers are encouraged to receive training to screen patients for ACEs. By screening for ACEs, providers can better determine the likelihood a patient is at increased health risk due to a toxic stress response, which can inform patient treatment and encourage the use of trauma-informed care. Detecting ACEs early and connecting patients to interventions, resources, and other supports can improve the health and well-being of individuals and families.

Beginning on January 1, 2020, DHCS began paying Medi-Cal providers $29 per trauma screening for children and adults with Medi-Cal coverage. Providers must self-attest that the training has been completed to be eligible to continue receiving Medi-Cal payment for conducting ACEs screenings. Additional details about the healthcare provider training and ACEs Aware Initiative are available at www.ACEsAware.org.

The term Adverse Childhood Experiences (ACEs) comes from the landmark 1998 study by the Centers for Disease Control and Prevention (CDC) and Kaiser Permanente. (1) (2) It describes 10 categories of adversities in three domains experienced by age 18 years:

Data show that 62% of California residents have experienced at least one ACE and 16% have experienced four or more ACEs, using 2011-2017 Behavioral Risk Factor Surveillance System (BRFSS) data from a random-digit-dialed telephone survey. (3)

Key findings of the ACE Study and subsequent body of research include:

Several decades of scientific research have identified the biological mechanisms by which early adversity leads to increased risk of negative health and social outcomes through the life course. Repeated or prolonged activation of a child’s stress response, without the buffering protections of trusted, nurturing caregivers and safe, stable environments, leads to long-term changes in the structure and functioning of the developing brain, metabolic, immune, and neuroendocrine responses, and even the way DNA is read and transcribed. This is known as the toxic stress response. (13) (14) (15) (16)

These biological changes play an important role in the clinical progression from ACE exposure to negative short- and long-term health and social outcomes. Further, both the disrupted biology and the associated negative outcomes demonstrate a pattern of high rates of intergenerational transmission. Development of the toxic stress response is influenced by a combination of cumulative adversity, buffering or protective factors, and predisposing vulnerability.

In addition to ACEs, social determinants of health (SDOH), such as poverty, discrimination, and housing and food insecurity, are associated with health risks and may also be risk factors for toxic stress. While validated odds ratios are available in large, population-based studies utilizing the 10 standardized ACE criteria, the strengths of associations between SDOH and health outcomes have not been similarly standardized.

These ACE-Associated Health Conditions include:

The higher the ACE score, the greater the risk for ACE-Associated Health Conditions.

However, even in the absence of health-damaging behavior, strong associations between cumulative childhood adversity and increased risk of serious health conditions persist. Evidence suggests that the toxic stress response likely plays a role in mediating both behavior-related and non-behavior-related pathways.